Starboard Choice Marine was founded in 2004 in downtown Mishawaka, Indiana. Steve and Andy Peterson saw a lack of service in the marine industry in the Michiana area. At that time Starboard Choice Marine was started as a "service only" facility. From the beginning, we have always said service will be our number one priority, with "old school" morals. We wanted to go back to the service mentality of when you stopped at a gas station, the guy at the pump filled your gas, checked your engine oil and cleaned you windows. Sixteen years later, in 2020, we still strive to keep that mentality. Our technicians have over 200 combined certifications and are factory trained annually. As we continued to grow, our customers were repeatedly asking us to sell new boats and motors. In 2012, we decided to look for what we believe is the best pontoon boat builder in the industry and took on Tahoe Luxury Pontoon boats. We also looked to sell a tough, reasonably priced fishing boat and took on the MirroCraft fishing boat line. In 2013, 2014 and 2015 we were the number one volume dealer in Indiana for Tahoe Pontoons. Still today, are currently one of the area's only Evinrude outboard Platinum dealerships, a Mercury Marine dealership, a Suzuki Marine dealership, as well as Tohatsu outboard dealership. In addition, we are also a Minn Kota Authorized Service Center. Over the past 12 years, Starboard Choice Marine had outgrown it's location in downtown Mishawaka, IN. We were looking to build a new, clean, modern showroom.

In October of 2015, Starboard Choice Marine purchased the Pleasant Lake Resort in Edwardsburg, Michigan. We had previously serviced numerous customers in this location, only 15 minutes from our Mishawaka, Indiana location. In addition, we were looking to expand our customer base in this area as well. We are now striving to bring the "old school" service mentality to the Village of Edwardsburg! 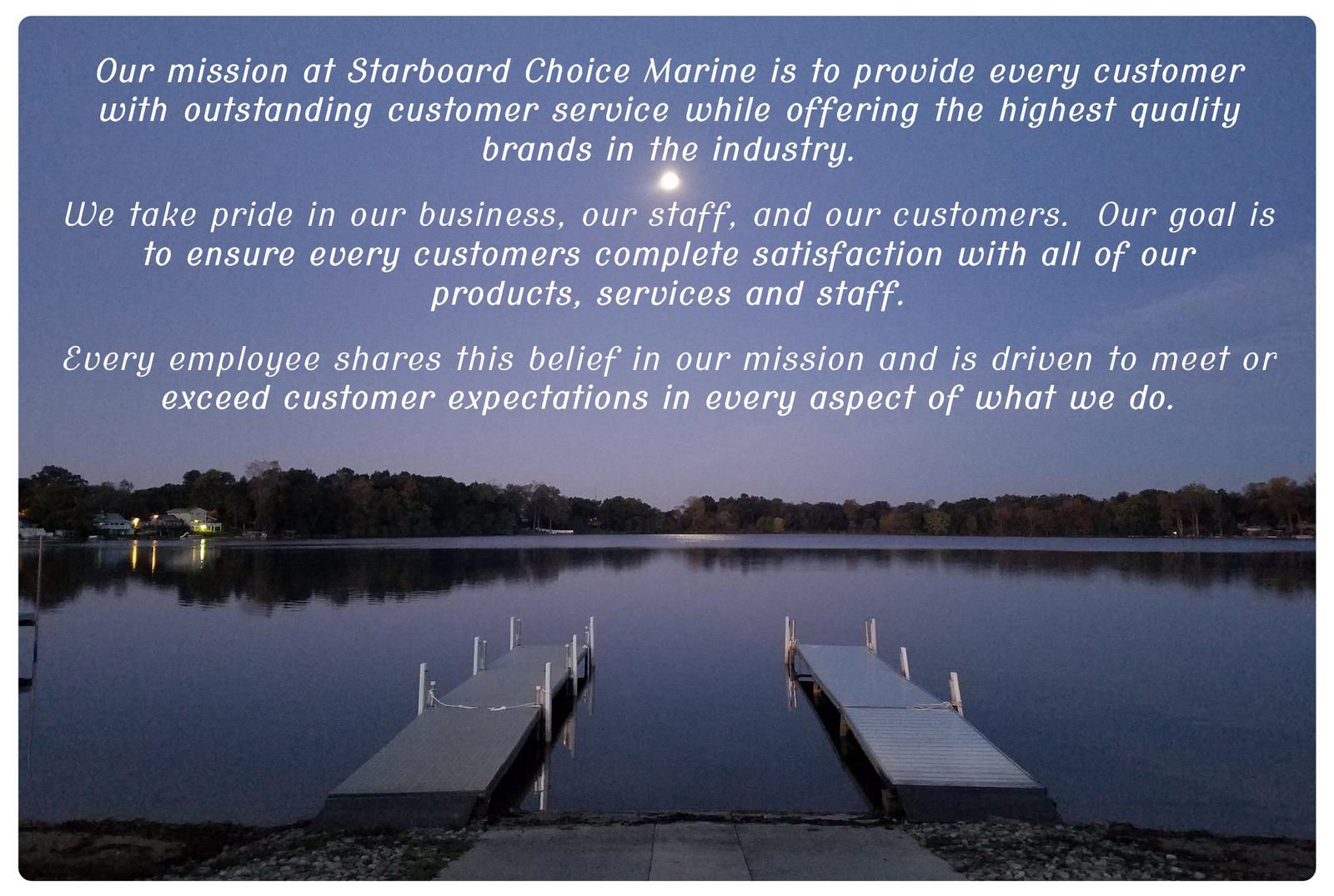 We started the renovation of the new showroom and built a brand new state of the art service facility as well, including a new boat launch. The new on-site launch now allows us to water test every boat that is serviced. During the summer of 2016, Starboard Choice Marine also received it's first national "Gold" dealership status for Tahoe Pontoons! It was at that time, that we also decided that it was time to start selling a boat hoist with the same quality as the Tahoe Pontoon lineup. Great Lakes Lifts were then added to our our growing list of products that we sell. In 2017, we added on to our facility again expanding with another new storage building on site. Sales had continue to grow and during the 2017 season, we took on PolarKraft aluminum fishing boats to our lineup of boat sales. With the help of our loyal customers, the sales of Tahoe Luxury Pontoons has continued to steadily increase annually from 2017 through 2019. Starboard Choice Marine has annually received the national "Gold" dealership status for Tahoe, as well as being one of the Top 25 dealers in the nation! It wasn't until 2018 and 2019 that Tahoe Pontoons has presented us with "Million Dollar Dealer" awards for each year, respectively. It was at that time during the summer of 2019, it was decided that we needed to expand again and build a brand new, New Boat Rigging Facility. It's completion during late summer has allowed us to be more efficient in the prep and delivery of our new products to our loyal customers.

The opportunity arose in late 2019 to expand our product offerings again, first with the addition of AlumaCraft fishing boats. While expanding our boat offerings, we also decided it was time to also focus more on the service end of our business again. This is also the first year in which we have started offering boat hoist installation and removal with the in-service of a state of the art work barge. The new work boat will allow us cater to our all of our existing customer's needs in hopes of being a one stop shop when it comes to boating! We look forward to the future and continuing to expand to meet the growing expectations of the boating industry while maintaining our "old school morals!" We would like to thank each customer that has helped us grow into the business we are today, it would not be possible without you!